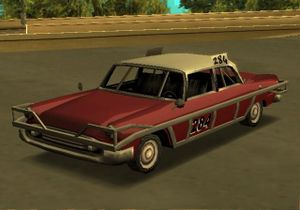 Bloodring Bangers are evidently vehicles modified for use in demolition derbies, and as such are stripped down with added safety features for the driver. The Bloodring Banger is originally available in GTA Vice City in the form of either a modified Glendale (internally named "bloodra") or Oceanic (internally named "bloodrb"); in GTA San Andreas, however, only the Glendale is used (despite the "bloodrb" handling line remaining in the GTA San Andreas game files).

Cosmetic modifications of the Banger include roll bars (which varies depending on their car number) and netting for the driver's compartment for GTA Vice City, and roll bars and welded bars of metal in GTA San Andreas. Bloodring Bangers are only capable of seating two, unlike the Glendale and Oceanic, which both seat four. The GTA San Andreas rendition does not even feature opening doors; in CJ's entry animation, he climbs in through the window. Being vehicles outfitted for demolition derbies, Bangers typically feature unconventional color schemes, including some with checkered roofs. Another minor difference is the roof-mounted racing numbers on Bloodring Bangers in the PlayStation 2 and PC versions; while the PS2 version has scribbled numbers, the same signage is completely black in PC versions, likely a programming mistake during porting.

Performance wise, the vehicles receive minor modifications. The car retains its rear-wheel drive configuration, but acceleration and speed for the car is very good, being much faster than the original Glendale and Oceanic. It has much tighter suspensions, which results in tighter cornering. The Oceanic Banger in GTA Vice City is lighter than the Oceanic, while the Glendale Banger is heavier than the Glendale.

Retrieved from ‘https://www.grandtheftwiki.com/index.php?title=Bloodring_Banger&oldid=362152’
Categories:
Cookies help us deliver our services. By using our services, you agree to our use of cookies.