The factory serves as a base of operation for the Cherry Popper Ice Cream Company and can be purchased by Tommy Vercetti as an asset and as a save point after "Shakedown" in GTA Vice City. 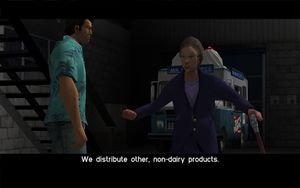 Maude Hanson reveals the true purpose of the factory after Tommy Vercetti purchases it in GTA Vice City.

In 1986, Tommy Vercetti buys the factory and the Cherry Popper Ice Cream Company from former owner Maude Hanson. Tommy initially bought the factory, believing it to be an actual Ice Cream Factory, but is then told by a grumpy Maude Hanson that the ice cream factory is actually a front to distribute drugs (possibly cocaine). Upon finding out that the ice cream is a front and that the factory actually distributes drugs, Tommy starts using the company trucks to Distribute drugs in the streets of Vice City. After successfully selling 50 units, the factory starts generating $3,000 a day.

The Cherry Popper Ice Cream Factory also serves as the primary location in the mission "Loose Ends". In the mission, Tommy is informed of a "valuable exchange" taking place on the roof of the Cherry Popper Ice Cream Factory between the Sharks and men in black suits. He is then ordered to kill everyone involved, take the merchandise and take it to an unnamed helipad at Escobar International Airport. Tommy enters the compound at the back of the factory, kills everybody involved and gradually works his way to the roof. He kills the men involved in the exchange, steals the merchandise and, using the nearby Maverick, he successfully takes the merchandise to the helipad.

The top of the building has two large mounds of ice cream, resembling a pair of woman's breasts.

The factory exists in GTA Vice City Stories, circa 1984, but it is not owned by the company. Nevertheless, the factory retains its blue color from the GTA Vice City rendition.

Retrieved from ‘https://www.grandtheftwiki.com/index.php?title=Cherry_Popper_Ice_Cream_Factory&oldid=416640’
Categories:
Cookies help us deliver our services. By using our services, you agree to our use of cookies.