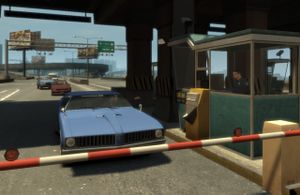 Paying up at the East Borough Bridge tollbooth, GTA IV.

In GTA San Andreas, tollbooths can be be found in San Fierro at the entrance to Gant Bridge. Although cars stop at the tollbooth, it isn't functional for players. Modifications can be used to simulate the tollbooth functionality from GTA IV.

In GTA IV, tollbooths are fully functional and appear in Charge Island along the East Borough Bridge, on the Dukes Bay Bridge (Sing Sing Ave bridge from Dukes to Bohan), and the long-term carpark in Francis International Airport. Players must stop and pay a toll of $5 to pass through; if the player breaks through the tollbooth gate without paying, the player will attract a wanted level of 1 star (although other drivers do not attract police attention if they break through the gate); this does not occur if the player is already wanted, and such an action will not recenter the search radius on the player in such a case, regardless of whether they are inside the search radius or not.

Tollbooths function the same way in GTA Chinatown Wars, attract the same toll ($5), and are in the same locations, with the exception of the Francis International Airport booth (now non-functional). The toll, however, must be actively paid—when driving slowly past the toll booth, the touch screen will show an image of the trough used to collect coins. Touching the trough will throw the required amount, allowing the player to continue. There is no room to drive around these booths.