After the murder of his father, his uncle, Wu Lee asked Huang to deliver a family heirloom, the Yu Jian Sword, to secure his family’s claim to the leadership of the Triad gangs. In 2009 he calls Huang to Liberty City. However, what was supposed to be a weekend of table service and strippers turns into a dangerous adventure after arriving at Francis International Airport only to be hijacked, robbed of his sword, and left for dead. Huang dug deep into the rotten core of Liberty City - and deep within himself -- to avenge his father's murder and reclaim his family's honor.

Throughout the course of the game, Huang is been shown to be very cocky and quick-witted. He appears to be much more intelligent than other characters who seem to be oblivious to Huang's constant mocking and sarcastic remarks in the game.

Huang does not value honor and tradition in the same vein as his Uncle, claiming that "this is 2009 not 1403." However, he is very loyal to his family and his gang, following their orders with little hesitation, even to the point he'd murder other Triads. Huang acknowledges the fact that he is a "pampered little snot" in the opening cutscene, and he reveals that he has visited Liberty City before where he "caught crabs from a Swiss tourist."

He seems to dislike the characters he gets missions from but he does show the occasional respect for his Uncle Wu Lee.

Huang has a record on the LCPD Database in Grand Theft Auto IV. It states that he is a 25 year-old Chinese native and known associate of Wu "Kenny" Lee's Liberty City Triad Gang. His record also states that he is been believed to be working freelance for other organizations in addition to his uncle's. 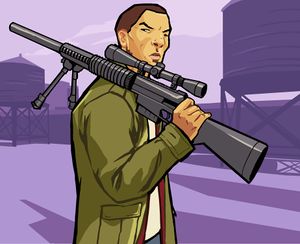 The correct pronunciation for the name Huang is whawng.[1] People mistakenly pronounce the name as whang,[2] which is incorrect. Huang commonly translates to yellow but can be translated to anything that uses the same pronunciation.

Another area of confusion is the mixed use of Mandarin and Cantonese spellings in his name. Huang Lee hails from Hong Kong, where the Cantonese dialect is more commonly used, but "Huang" is written in a Romanized Mandarin spelling when "Wong" or "Wang" should be used; "Lee" is correctly Cantonese, while the Mandarin equivalent is "Li". This means Huang Lee's name may also been purely referred to as "Wong Lee" or "Wang Lee" in Cantonese and "Huang Li" in Mandarin. His early background in Hong Kong remains largely unexplained.

Retrieved from ‘https://www.grandtheftwiki.com/index.php?title=Huang_Lee&oldid=402182’
Categories:
Cookies help us deliver our services. By using our services, you agree to our use of cookies.