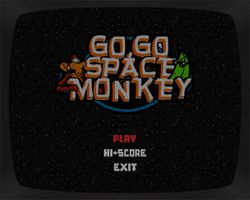 Go Go Space Monkey is a simple side-scrolling video game in which the player assumes the role of a monkey that is riding a wooden tub strapped with rockets while battling waves of alien bananas on spaceships. With only three lives, the player is required to destroy as many enemy ships as possible before they run out of lives. A hit by a bullet from an enemy or a collision with an enemy ship results in the player losing a life.

Initially, the player is only capable of shooting one stream of bullets against the enemy, making killing slightly difficult. However, for every strand of enemy ships the player destroys, they are granted a power-up that they must retrieve before it disappears off the screen, thought this is not necessary. The upgrades steadily improve the player's firepower, including increased shooting speed and additional streams of bullets. As the player's firing capabilities improves, so will the speed and ferocity of the enemies, who will fluctuate along the screen quicker and fire more bullets against the player. If the player is killed, their firepower is reset to what they had in the beginning, requiring the player attain upgrades all over again.

Despite its supposed difficulty, players can easily attain a hi-score in their first sitting as the pre-existing highest scores are not remarkable to begin with.

In Grand Theft Auto: Liberty City Stories, a video game titled "Space Monkey 7" is heard advertised on the radio. It is supposedly a sequel to Go Go Space Monkey, but its format has changed greatly: the game involves destroying "Doctor Chank's dark simian research facility" after a nuclear holocaust.

Retrieved from ‘https://www.grandtheftwiki.com/index.php?title=Go_Go_Space_Monkey&oldid=373214’
Category:
Cookies help us deliver our services. By using our services, you agree to our use of cookies.