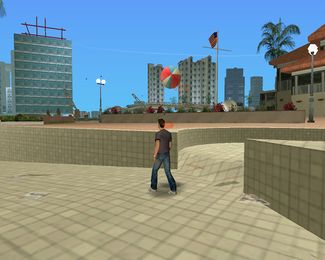 Keepie-Uppy beach ball is a hidden minigame in Grand Theft Auto: Vice City which challenges the player to continuously bounce a beach ball without it hitting the ground. Largely undocumented within the game, players can find a handful of beach balls in specific wide open areas in the city; the beach ball itself is identifiable by its red, white and blue color, and a slightly rapid bouncing motion.

The feature has no relevance in the actual game, and the only reward is a recorded highest number of bounces the player manages to perform, which is viewable in the game's stats, where the minigame's name is also made known.

Players can begin at any moment of the game by walking up to the beach ball, thereby forcing the ball to bounce high in the air, and positioning the player character to stand at the spot where the ball will fall, triggering the ball to bounce into the air again and the game beginning to keep score of the number of bounces made (by generating a floating number counting the number of bounces over the player's head) until the ball touches the ground, ending the minigame.

Depending on the player's position in relation to the falling ball, the ball can bounce to a different direction, providing the player with a degree of challenge; the ball will also shoot higher to a capped height after repeated bounces. Players can keep track of the ball's position by observing the shadow of the ball, positioning their player character as best as possible under the ball's shadow.

Beach balls used to trigger Keepie-Uppy's tend to be difficult to spot due to the small size of the balls. However, the balls are confined within specific invisible boundaries that prevent them from ending up out of bounds.

There are two beach balls with set spawn points, both in Starfish Island:

Beach balls randomly spawn along the beach in Vice City Beach. Sightings of the ball include:

Retrieved from ‘https://www.grandtheftwiki.com/index.php?title=Keepie-Uppy_Beach_Ball&oldid=332706’
Categories:
Cookies help us deliver our services. By using our services, you agree to our use of cookies.