Starfish Island. The largest mansion on the far side of the island is Vercetti Estate. 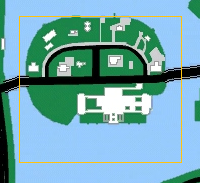 Starfish Island is a large oval-shaped island at the center of Vice City's bay.

Located between southern Vice Beach and Vice City Mainland, Starfish Island a wealthy district containing lavish mansions and large estates with swimming pools, large garages, and parked speed boats. There are also two specially-shaped swimming pools in the shape of a Rockstar logo and a bikini clad woman on the island in the yards of two mansions.

The island is home to drug baron Ricardo Diaz until 1986, when is killed in a large shoot-out involving Tommy Vercetti and Lance Vance, who take over the mansion.

Starfish Island's design is likely to be inspired by the many real-life residential islands, natural or artificial, that link Miami Beach and mainland Miami, including the Venetian Islands along the Venetian Causeway, and Palm Island, Hibiscus Island, and Star Island adjoining the MacArthur Causeway.

Retrieved from ‘https://www.grandtheftwiki.com/index.php?title=Starfish_Island&oldid=415350’
Categories:
Cookies help us deliver our services. By using our services, you agree to our use of cookies.