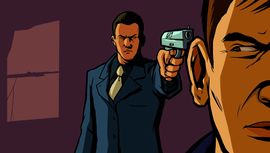 Liberty City Survivor is a reality show in Grand Theft Auto III about "20 recently paroled guys...equipped with grenade launchers and flamethrowers". They have to hunt each other down until only one man is left standing. The idea parodies reality television, especially the very early 2000's trend towards more degrading formulas such as Fear Factor. A man on the commercial states that "...all of a sudden, some guys crashed through the window and started shooting at each other. I was so excited, I didn't even notice I've been hit; after that I was hooked on Liberty City Survivor. I watch it every day in the hospital!"

Retrieved from ‘https://www.grandtheftwiki.com/index.php?title=Liberty_City_Survivor&oldid=304860’
Categories:
Cookies help us deliver our services. By using our services, you agree to our use of cookies.