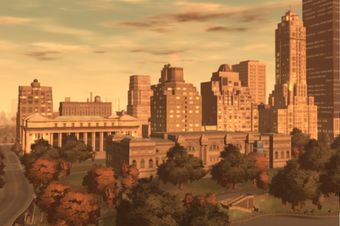 Middle Park East, as seen towards the East from above Middle Park. The Libertonian is visible in front of the neighborhood.

Middle Park East is a neighborhood in Algonquin, Liberty City, located along the Humboldt River, north of Hatton Gardens by Nickel Street, south of Lancaster by Quartz Street and east of Middle Park by Columbus Avenue. It is based on the Upper East Side, a high-end residential/commercial neighborhood in Manhattan.

Middle Park East is served by two subway stations. The Quartz East station, connecting players to the Algonquin Outer Line, has entrances at Quartz Street and Albany Avenue. The second station, East Park station, is located at Columbus Avenue, at the border between Middle Park and Middle Park East.

Retrieved from ‘https://www.grandtheftwiki.com/index.php?title=Middle_Park_East&oldid=367000’
Category:
Cookies help us deliver our services. By using our services, you agree to our use of cookies.