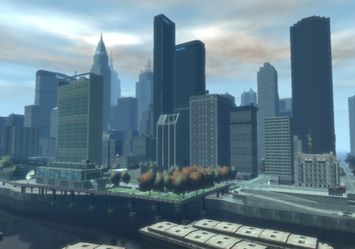 Hatton Gardens, as viewed to the southwest from the Humboldt River. The skyline of neighboring Lancet and Easton is visible in the background to the left.

Hatton Gardens is a five-block neighbourhood in eastern Algonquin, Liberty City. The neighborhood is located along the Humboldt River to the east, bordering Middle Park East to the north by Nickel Street, Lancet to the south by Lorimar Street, and Star Junction to the west by Columbus Avenue.

As is with Midtown Algonquin neighbourhoods to the east, Hatton Gardens contains several high-rise apartments and commercial buildings. The area does not strictly draw inspiration from one district, but features several landmarks based on real-life counterparts roughly located in the same part of Midtown Manhattan (predominantly in the Turtle Bay area). The district is described as a "fashionable" shopping district,[1] although the player has little available interaction in the area.

Hattons Garden is primarily served by one station, Manganese East on the Algonquin Outer Line, with entrances off Manganese Street and Albany Avenue outside the Civilization Committee complex. Along the neighborhood's western border lies East Park, the nearest station to Hatton Gardens that provides access to the K/C Algonquin Inner Line.

Retrieved from ‘https://www.grandtheftwiki.com/index.php?title=Hatton_Gardens&oldid=366997’
Category:
Cookies help us deliver our services. By using our services, you agree to our use of cookies.