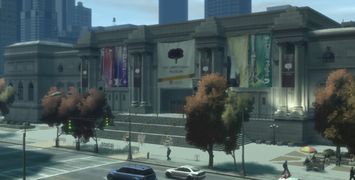 The frontal facade of the Libertonian Museum.

The Libertonian is a museum in Grand Theft Auto IV based on the Metropolitan Museum of Art.

The museum is located on the eastern edge of Middle Park (similar to the Met's location in Central Park), fronting Columbus Avenue and Middle Park East, Algonquin, Liberty City. At the time of the game's setting, the musuem is under renovation and is closed to the general public. It features various pieces of historic exhibits (some of which are yet to be unpacked or are covered), as well as skeletons of three dinosaurs in the main lobby.

The Libertonian's name could be a play of "Smithsonian".

Main articles: Museum Piece, Collector's Item, and Not So Fast

The location is used in "Museum Piece", "Collector's Item" and "Not So Fast", where Niko Bellic and Johnny Klebitz meet Isaac Roth and his associates in a diamond deal on the second floor. However, Luis Lopez opens fire on the diamond deal ensuing a chaotic escape for the dealers.

Niko Bellic drives to the museum, meeting Johnny Klebitz at the side, then they both head in. After the deal is ambushed Niko shoots his way out, killing Ancelotti goons before escaping.

Johnny Klebitz drives to the museum, he waits at the side for Niko Bellic, the two head in. After the deal is ambushed Johnny takes the 2 million in cash, betraying Ray Boccino, he kills Boccino's goons and escapes.

Luis Lopez arrives via Buzzard, landing on the roof, he scopes out the deal, and then attacks. He steals the diamonds off of Issac Roth, then escapes with the Buzzard before taking out pursuing police helicopters in the air.