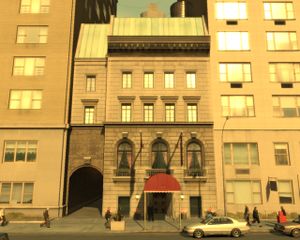 Exterior of Jousters in The Lost and Damned.

Jousters is depicted as a blue blood affair where Liberty City's elite mingle with politicians while sitting in saunas or enjoying an afternoon cordialand a cigar. They said in a statement to the press that Jouster's is "a club for gentlemen, not genetic confusions" when a transgender man was denied access and tried to sue them.

The club serves as an important location in TLAD where player character Johnny Klebitz is asked to meet Thomas Stubbs III for two missions ("Politics" and "Off Route"); during each visit, Stubbs is depicted patronizing the club's facilities, including a massage room and sauna. Leavis is depicted as the club's maître d', initially treating Johnny harshly for his confrontational behavior, but finally warming up to him after learning Stubbs invited him in.

The club itself is depicted as a historical low-rise at Columbus Avenue in Middle Park East, Algonquin, Liberty City, just next door to Yusuf Amir's upscale apartment in The Ballad of Gay Tony. In TLAD, the club boasts a minimum of three interiors used in cutscenes but inaccessible in normal gameplay, including the lobby, sauna, and massage room. Classical music can be heard in the lobby, but will also emanate from the building when outside, if the player walks close to the main entrance of the building. It is also common to find a doorman pedestrian at the entrance.