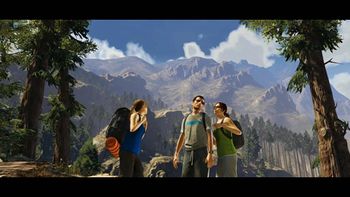 One face of Mount Chiliad in the first GTA V trailer

Mount Chiliad is a large mountain in Los Santos in Grand Theft Auto V, named after the previous version, it could be based on Mount Diablo or Mount Whitney.

Located far to the north, in the Chiliad Mountain State Wilderness, it serves as the tallest mountain in the game. Two small towns sit at its base. Grapeseed can be found to the southeast, and Paleto Bay to the northwest.

At the base and peak is an aerial tramway station to facilitate travel. There is also a hiking trail running down the east side of the mountain.

At the peak of the mountain is a small wooden observation deck. Two stationary telescopes can be found on the deck, which cost $1 each per use. From the summit, the player can view Grapeseed, Sandy Shores, the Alamo Sea, the Grand Senora Desert, and portions of the Los Santos skyline. In addition, two dirt bikes are parked at the peak of the mountain near the observation decks. There is also a derelict wooden ramp near the Gondola station that can be used to drive off the edge.

A parachute can be found on the tramway boarding platform. One letter scrap piece is located near the Gondola where the parachute is found.

The message "Come back when your story is complete" is written on the back of the observation deck. This is later revealed to be related to the hidden UFO sighting.

Upon reaching 100% game completion and standing on the observation deck, a UFO with FIB markings will appear overhead. There are three conditions that must be met:

Once the UFO appears, it will stay there as long as the player is on the mountain peak.

Retrieved from ‘https://www.grandtheftwiki.com/index.php?title=Mount_Chiliad_in_GTA_V&oldid=400000’
Categories:
Cookies help us deliver our services. By using our services, you agree to our use of cookies.