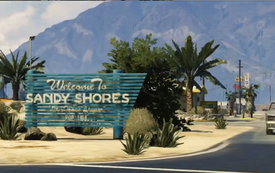 Sandy Shores is a town located inside the Grand Senora Desert in Blaine County, San Andreas, located south of the Alamo Sea and appears in both Grand Theft Auto V and Grand Theft Auto Online. Sandy Shores has a population of 3,010 people although there are not enough houses and trailers within the town to house that number of people. The town is home to Trevor Philips, one of the protagonists of GTA V.

Sandy Shores was once a town where people would let off steam by 'drinking themselves unconscious every night'. In 1978 media descended upon the town following the death of Jolene Cranley-Evans, who people correctly speculated had been murdered by her husband Jock Cranley. Jeb Evans, Jolene's father, later called for a proper police investigation, although Jock was never charged. In 1999 eight people went missing while jogging in and around Sandy Shores. Merle Abrahams was arrested later in the year for the murders with the media once again returning. The residents of Sandy Shores turned against Abrahams and burned down his house. Beginning at some point around 2003, Sandy Shores and the rest of Blaine County became home to a large amount of methamphetamine labs. The number of labs is presumably very high, with Bucy Joe Houston suggesting that if she had a dollar for every methamphetamine lab in Sandy Shores from 2003 that she would be able to purchase fibreglass roofs for her trailer. At some point after 2004, Trevor Philips moved to the town and established a small gang in the town. Many of the people in Sandy Shores became methamphetamine addicts by 2013.

In 2013, Trevor Philips and Ron Jakowski take control of the towns airfield from The Lost Brotherhood motorcycle gang. Trevor later meets Tao Cheng and his translator at the Yellow Jack Inn, with the two keen to see his operation to report back to Wei Cheng Triad leader Wei Cheng. The Los Varrios Aztecas destroy the possibility of any deal when they unsuccessfully attempt to exact revenge at Liquor Ace for Ortega's trailer being pushed into the river (and Ortega's murder if the player chose to kill him). Tao and his translator meet Trevor at the Yellow Jack Inn once again and inform him they have decided to work with the O'Neil Brothers, although Trevor later destroys their farm and kills most of the brothers. Trevor and Wade Hebert, an associate of Trevor's, later leave Sandy Shores and begin living in La Puerta, Los Santos. After kidnapping Ferdinand Kerimov from the IAA Building for FIB agents Steve Haines, Dave Norton and Andreas Sanchez, Trevor takes the helicopter they had been provided with back to the airfield and places graffiti over the FIB logo.

Trevor and Michael De Santa are forced into hiding at Trevor's trailer in Sandy Shores after Trevor kidnaps Patricia Madrazo, the wife of Madrazo Cartel leader Martin Madrazo. The three live inside Trevor's trailer and are frequently joined by Ron Jakowski, Trevor's next door neighbour. Elwood, Walkton and Wynn O'Neil, having failed to locate Trevor in Los Santos, begin driving to Sandy Shores before they are intercepted and later killed by Franklin Clinton, Chop, Michael and Trevor. Michael and Trevor are later joined by Lester Crest and begin planning to rob the Blaine County Savings Bank, which they later do. Trevor and Michael leave Sandy Shores and return to Los Santos after Trevor returned Patricia to her husband.

Trevor also meets Cletus Ewing in the town with Cletus and Trevor shooting various targets. Michael De Santa, after joining the Epsilon Program, later lands a plane at the Sandy Shores Airfield. Should the player decide not to kill Trevor, he meets his mother, having just been released from prison, where he agrees to steal a van of Deludamol. When he returns with the drugs, however, his mother has left.

Trevor runs his gang from the Liquor Ace store on the outskirts of town while The Lost Brotherhood motorcycle had influence in the town with an airfield, which is later acquired by Trevor Philips. The Los Varrios Aztecas presumably have influence in the town having based their operations around the Alamo Sea.

Retrieved from ‘https://www.grandtheftwiki.com/index.php?title=Sandy_Shores&oldid=416437’
Category:
Cookies help us deliver our services. By using our services, you agree to our use of cookies.