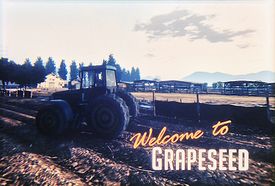 A glimpse of Grapeseed on a promotional GTA V photo viewer.

Grapeseed is a town located in Blaine County, San Andreas, just north of Sandy Shores and the Alamo Sea. Grapeseed is a rural, mainly farming, community and has been hit hard by the in-game economic crisis with a number of closed businesses located on Grapeseed Main St with some houses also having been foreclosed. Grapeseed also has connections to the Senora Frwy, connecting it to Los Santos in the south and Paleto Bay in the north. Grapeseed is based on Grapevine, California.

During the mission Crystal Maze, Trevor Philips travels to Grapeseed from Sandy Shores and destroys the O'Neil Farm, which had been used as a methamphetamine lab, and kills all the O'Neil brothers, except Elwood, Walton and Wynn. Michael De Santa also drives to Grapeseed to talk to Marnie Allen, an Epsilon Program recruiter, who tasks him with stealing five vehicles in Los Santos, and later meets Marnie and Jimmy Boston in his attempts to be initiated into the program, locating an 'alien artifact'.

Maude Eccles' bounty hunting side mission begins from her trailer in the town, with Trevor Philips eventually returning Ralph Ostrowski, Glen Scoville, Larry Tupper and Curtis Weaver to her trailer after capturing them. Two random events occur in Grapeseed, both involving a shop being robbed by members of The Lost Brotherhood with the player, regardless of which protagonist is being used, tasked to retrieve the money for the shop assistant. Trevor can also purchase the McKenzie Field Import/Export, which gives him access to another airstrip and hangar.

Retrieved from ‘https://www.grandtheftwiki.com/index.php?title=Grapeseed&oldid=409345’
Category:
Cookies help us deliver our services. By using our services, you agree to our use of cookies.