The companies main lines of work are building construction and real estate ownership. The company, despite it claiming to be a legitimate construction company, is involved with illegal activities, since in both its appearences, it is shown to have ties with the Colombian Cartel.

Ties with the Colombian Cartel 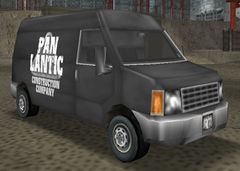 It is evident that the Panlantic Construction Company has links with the Cartel, since in both its appearences, having ties with them in both GTA III and GTA Liberty City Stories.

In GTA Liberty City Stories, the Cartel is shown to have only small connection with Panlantic. It is first evidenced when Cartel men in Cartel Cruisers are hired to escort Avery Carrington to their central when he arrives in Liberty, later being killed by Leone Family gang member Toni Cipriani. And the next thing is that once Panlantic is constructing a building over the remains of the Forelli Family base in Fort Staunton, several Cartel men are guarding the entrance.

In this game, the Cartel have bigger ties with the Panlantic Construction Company. A hangar at Francis International Airport belongs to Panlantic and is guarded by Cartel thugs. Then, Fort Staunton, a district with several Panlantic buildings is Cartel turf. Also, the former site of the Forelli base where Panlantic started building in 1998 is still in the process of being built and is a hideout for several high ranking Cartel members like Miguel and Catalina and a holding site for Cartel prisoners.

Known workers for the Panlantic Corporation:

Colombian Cartel
Retrieved from ‘https://www.grandtheftwiki.com/index.php?title=Panlantic_Construction_Company&oldid=416551’
Categories:
Cookies help us deliver our services. By using our services, you agree to our use of cookies.