Nothing brings down real estate prices like a good old fashioned gang war.

Avery Carrington was born and raised in Texas and later moved to Vice City, becoming, at some point, a successful property magnate and real estate mogul to his willingness to use any tactic (including gang warfare, arson, intimidation, murder and demolishing opponents buildings). Avery is heavily influenced by his father and takes on a protégé, Donald Love, passing on his knowledge, which Love would later use to his own advantage.

In 1986 he is financing the construction of a building in Vice Point and is one of Vice City's social elite, attending Colonel Juan Cortez' party. Carrington, however, faces problems from the Spand Express company, who refuse to sell their land, and another further advanced construction site opposite his own. Ken Rosenberg, a lawyer introduces Carrington to Tommy Vercetti, who helps to Spand Express by causing a riot and destroying three Spand Express vans. Carrington, impressed with Vercetti's ability, later hires him to murder a man who refuses to sell some land to Carrington and to structurally weaken the construction site located opposite his own. Carrington continues with his business before asking Vercetti for help again, this time having him spark a gang war between the Cubans and the Haitians in order to drive down property prices, and later gives Vercetti advice in how to build his criminal empire in the city following the death of drug baron Ricardo Diaz.

Avery Carrington continued to expand his business, appearing on a neon sign in Las Venturas, San Andreas in 1992. He continues in his work and in 1998 he flies to Francis International Airport to meet with the Colombian Cartel to discuss plans to develop the Fort Staunton area of Staunton Island, Liberty City. Carrington's old protégé, Donald Love, hears of his impending return and hires Toni Cipriani to kill Carrington to acquire his real estate plans, as the Panlantic Corporation who do 'anything to get prime real estate'. Toni Cipriani later steals Carrington's body for Love, who eats the body on his flight away from Liberty City.

The Vice City Bureau of Investigation has a file on Carrington[1]: 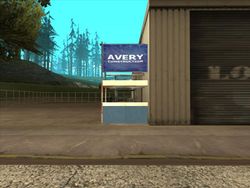 Retrieved from ‘https://www.grandtheftwiki.com/index.php?title=Avery_Carrington&oldid=400498’
Categories:
Cookies help us deliver our services. By using our services, you agree to our use of cookies.