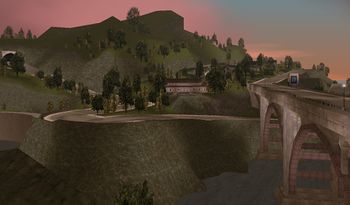 Cedar Grove in GTA III, as viewed to the east from Pike Creek, across the valley.

Being a suburb, Cedar Grove features many large homes, including the Cartel Mansion, which is occupied for a short time by Donald Love in GTA Liberty City Stories (circa 1998) and later becomes the headquarters of Catalina and the Colombian Cartel in GTA III (circa 2001). Leone Family Caporegime Toni Cipriani also owned a home near the western edge of this district in GTA Liberty City Stories.

Above the district on a massif, the Cedar Ridge Observatory can be seen, but it is almost impossible to reach without the use of a Dodo or Rhino (with the "flying car" cheat activated). The infamous "Ghost Town" is also located/hidden behind the massif.

There are also two road tunnels that would seem to connect to each other. These tunnels supposedly link to another part of the city, however they are inaccessible to player in GTA III. They are accessible in GTA Liberty City Stories.

The name of the neighborhood may be a play on Jersey Shore, which is it's real-life counterpart, despite its name is taken directly from his homonym, also has some similarities in upper-class neighborhoods like Long Island and Westchester.

Colombian Cartel
Retrieved from ‘https://www.grandtheftwiki.com/index.php?title=Cedar_Grove&oldid=351484’
Category:
Cookies help us deliver our services. By using our services, you agree to our use of cookies.