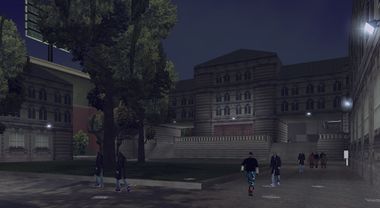 The main feature in the district is the Liberty City Community College (also known by in-game signage as "St. Matthias University"). The college was named the worst in the United States of America. As the location is primarily college grounds, college students, some in varsity jackets bearing the Liberty City Cocks based in the Liberty Memorial Coliseum in neighboring Aspatria, as a common sight in the area.

The campus itself encompasses two blocks, the southern block featuring a modern extension of the campus. According to the official GTA III website, an "LCC [(Liberty City College)] Meteorology" center is also situated within the southern half of the campus grounds.

The district also boasts a few businesses and residences, but are primarily concentrated towards the southern end of the district.

Carson General Hospital in neighboring Rockford is located only opposite the campus grounds. In addition, Liberty Campus is a stop along the Liberty City Subway system, its station portal located on the northeastern corner of the district.

In GTA III, a payphone located on the western edge of the district is used by the player to receive missions from King Courtney.

Retrieved from ‘https://www.grandtheftwiki.com/index.php?title=Liberty_Campus&oldid=328689’
Category:
Cookies help us deliver our services. By using our services, you agree to our use of cookies.