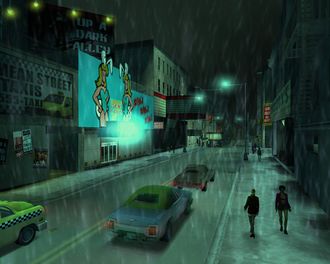 The Red Light District in GTA III, as seen to the north. Luigi's Sex Club 7 is visible to the left.

As implied, the Red Light District is the red-light district of Liberty City, housing much of the city's seedy businesses, including strips club, pornography stores and prostitution. It is based on "The Block" in Baltimore and 42nd Street in New York. The district's pedestrians are characterized by a large proportion of prostitutes, and is the only area where pimps, easily spotted by their purple jackets and hats, can be found.

The district is busy during all 24 hours of the day, although the player sees the pimps and hookers more at night. Shooting pimps has no effect on whether the prostitutes are emancipated from Luigi Goterelli's control or not. Prostitutes can be used to increase health in exchange for cash, or can be shot down if the player desired to play vigilante against the prostitution industry.

Whilst the district is known for its adult businesses, the western and eastern edges of the district do no appear to share this character, appearing more generic. The western edge of the district occupies part of Portland's waterfront promenade, while the eastern edge bordering Saint Mark's consists of several large buildings, including a large gray skyscraper with an unfurnished interior and scaffolding.

As of 2001, the setting of GTA III, the Leone Family has strong control over this region. There are many strip clubs, adult stores, pimps, and prostitutes. Luigi's Sex Club 7, a Leone-controlled adult business, which was earlier Paulie's Revue Bar, is the perfect place for trance music, according to Lips 106.

During the events of GTA III, Claude and 8-Ball escaped to a small apartment in Red Light District after the attacks on Callahan Bridge, and it becomes Claude's safehouse until he moves to Staunton Island.

Retrieved from ‘https://www.grandtheftwiki.com/index.php?title=Red_Light_District&oldid=379247’
Category:
Cookies help us deliver our services. By using our services, you agree to our use of cookies.