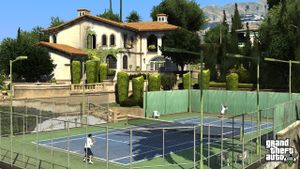 Tennis is a sport in the Grand Theft Auto series, and an interactive minigame that will appear in Grand Theft Auto V. Rockstar Games has released a screenshot on August 21st, 2012 depicting a tennis court and two pedestrians playing. The ability to play tennis was confirmed in a Game Informer preview on November 8th, 2012.

In GTA V, the power and accuracy serving the ball is determined through a power meter; the centre point of the power meter delivering the best possible serve. Free moving around the court and aiming can also be achieved. Other mechanics are currently unknown.

A tennis match in action.

This is a list of locations of tennis courts:

Retrieved from ‘https://www.grandtheftwiki.com/index.php?title=Tennis&oldid=384944’
Categories:
Cookies help us deliver our services. By using our services, you agree to our use of cookies.