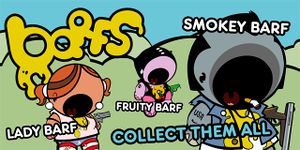 The Barfs is a Saturday Morning cartoon advertised in Grand Theft Auto: Vice City Stories, appearing on VBC. The show is a parody of The Smurfs. Like its real life counterpart, each character has a unique personality and appear on numerous amounts of branded merchandise, such as Little Lacy Surprise fashion underwear and collector's glasses from Pizza Stack for $15 each after buying 2 large pizzas and a pitcher of Sprunk. Unlike the Smurfs, however, the Barfs hate sharing and anything foreign, alluding the two to communism. Each Barf has his or her own firearm for "protection and fun". In Grand Theft Auto IV, the Barfs is seen in a FLEECA card promotion for kids.

Retrieved from ‘https://www.grandtheftwiki.com/index.php?title=The_Barfs&oldid=376171’
Category:
Cookies help us deliver our services. By using our services, you agree to our use of cookies.