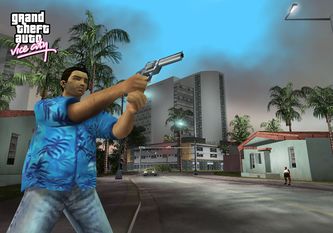 The Colt Python is the most accurate pistol and only revolver available in the GTA III Era series of games. It also shares the record for being the most powerful pistol with the Desert Eagle, although the Desert Eagle edges it out, being a .50AE instead of a .357. The Colt Python was first revealed in Grand Theft Auto: Vice City, and is available to the player on Vice City's main island, Ammu-Nation for $2000, spawnable in Vercetti Estate, and discoverable in several locations. The high cost of the revolver (compared to the M1911's modest $100 price tag) comes with the reward of it being almost guaranteed to kill any target with a single shot. However, the gun cannot be fired while running, and must be fired from a Weaver position (grasping the butt of the gun with the right hand, then cradling the right hand and gun with the cupped left hand, all while planting feet at a wide stance) due to the heavy recoil of the .357 Magnum cartridge. It also has a moderate cylinder capacity of 6 shots, making it excellent against small groups. The Python is also available in Grand Theft Auto: Liberty City Stories, and the version in Grand Theft Auto: Vice City Stories (named Equalizer) features a laser scope and a 6" barrel, although the scope cannot be used. The Colt Python is also a weapon in Grand Theft Auto: Chinatown Wars, and was named the Revolver. Although it cannot be visibly seen in the game, a HUD image of the weapon can be seen on the touch screen and on the Ammu-Nation website (strangely, it resembles a snub-nosed .38 Smith and Wesson or a Colt Detective Special).

Retrieved from ‘https://www.grandtheftwiki.com/index.php?title=Python&oldid=393900’
Categories:
Cookies help us deliver our services. By using our services, you agree to our use of cookies.