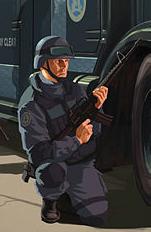 A NOOSE agent wielding an M16 in a GTA IV game art. 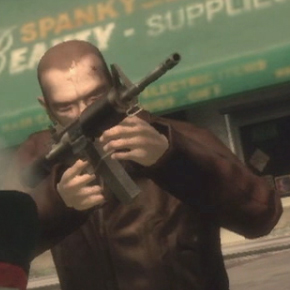 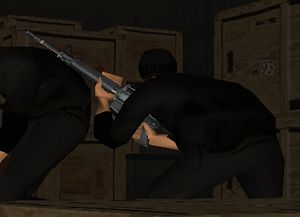 An M16A2 in the intro cutscene for GTA Vice City.

The Armalite/Colt M16 series of assault rifles are a staple of the GTA series, first appearing in GTA III, and then in every GTA game since. The M16 is useful in almost any situation, boasting accuracy, power and magazine capacity. Since the rifle fires the relatively powerful 5.56mm NATO round, it has noticeable recoil, albeit not nearly as much as the bigger AK-47. Throughout the games, the models of M16 derivatives features differ slightly, along with zoom capability, rate of fire, and power.

In Grand Theft Auto III, the firearm is an 'exaggerated' Armalite AR10, with an extremely high rate of fire and a 60-round magazine. In GTA Vice City, the weapon is rendered more realistically — it resembles a Colt Model 733, although it is referred to incorrectly as the "M4".

The M4A1 in Grand Theft Auto IV is referenced in-game as the Carbine Rifle. It can be purchased from the back-alley gun shops for $5,000 and each additional magazine will cost $100. It can be purchased from Little Jacob for $3,500 and each additional magazine costs $70. The Carbine Rifle can also be acquired from NOOSE officers and certain LCPD officers. It cannot be fired from cars, unfortunately. This weapon can kill with two headshots in multiplayer and single player, and is highly effective during Team Deathmatch. The M4A1 is the best weapon to have with its unique and perfect combination of capacity (with 30 round magazine, enough for 15 kills per magazine with perfect aim), power (2 headshots kill anybody without armor), range (most range on a non-sniper weapon in the game), and accuracy (resets to point aimed at almost immediately). This weapon can turn an early deficit into a comeback and even a blowout against stronger, better armed, or teams with more people, and is even more effective on single player and against police and pedestrians on multiplayer, where it is usually a 1-hit kill.

Retrieved from ‘https://www.grandtheftwiki.com/index.php?title=M16&oldid=415574’
Categories:
Cookies help us deliver our services. By using our services, you agree to our use of cookies.