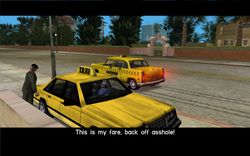 The VC Cabs driver picking up the V.I P.

The V.I.P is an unnamed minor character appearing in Grand Theft Auto: Vice City. He appears in the game as a very wealthy resident of Starfish Island. He only appears in one mission: V.I.P.. Although he has a minor speaking role, his voice actor is not credited.

This article is a Stub. You can help Grand Theft Wiki by expanding it.
Retrieved from ‘https://www.grandtheftwiki.com/index.php?title=V.I.P._(person)&oldid=325163’
Categories:
Cookies help us deliver our services. By using our services, you agree to our use of cookies.