Vehicle damage is a fundamental aspect in the GTA series where nearly any vehicle is susceptible to damage from the environment, typically in the form of crashes, gunfire, or other external forces, as it does in real life, providing a certain degree of realism and illustrating the vulnerability of vehicles in the series. If a vehicle is sufficiently damaged, it explodes in a fireball, destroying it and rendering it useless. As the series progresses, the variety of damage has been increased, offering additional opportunities on how the player can destroy vehicles. In addition, the manner in which damage is depicted in game has changed as new game engines are used.

Damage resistance should be considered when selecting a car for a task. The high performance of certain vehicles may be offset by a weaker body, while a slow, heavy vehicle may be far more resilient to damage. If a player is not proficient in their driving or has not properly planned their path to their destination, the choice of vehicle may become a hindrance if the player is urgently completing a mission or escaping from pursuers.

Certain missions and tricks throughout the series can create a damage-resistant vehicle, which include resistance to bullets, explosions, physical collisions, and fire. Tanks and certain armored vehicles are also naturally highly resistant to damage and are invulnerable to certain forms of destructive forces.

As the series began, vehicles in Grand Theft Auto 1 and Grand Theft Auto 2 can be destroyed via high speed crashes, gunfire from firearms and drops into water, features which are still present in all games after. The games are also capable of accurately visualizing portions of vehicles which are damaged using collision detection, and each vehicle has a number of sections that represent each part as either damaged or undamaged: six in GTA 1 and four in GTA 2.

Unlike much of the series after, a vehicle's performance degrades as its damage is increasingly severe. For GTA 1, the only hint to this is a growingly louder clunking engine noise; GTA 2 includes both the noise and an additional fire in the middle of the vehicle, which grows with increased damage or grows on its own. 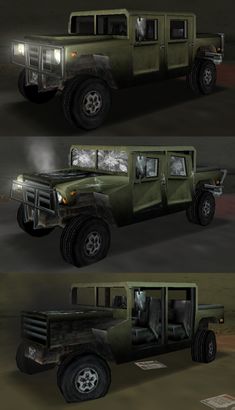 A Patriot in various stages of damage (GTA Vice City).

By Grand Theft Auto III, vehicles are far more sensitive with damage, as parts can show signs of damage with the slightest collision, as well as high speed collisions with pedestrians. However, the performance of vehicles remains unaffected from damage, and imminent destruction of vehicles are represented by a burning engine. If a vehicle is flipped over, its engine may also engulf in flames and result in the vehicle exploding.

Developing from GTA 1 and GTA 2, GTA III's visual representation of vehicle damage improved in complexity. The engine may now emit steam and/or smoke, providing a gauge on how much damage a vehicle has before it is on fire, indicating the vehicle's imminent destruction. Most road vehicles in the game are also constructed from individual polygons with a central "core" (the wheels, engine, chassis, and body of vehicles). The damage system of vehicles represents the minor vehicle parts (doors, frontal quarter panels/head lights, and bumpers) as undamaged, damaged or missing, based on collisions detected on the vehicle; the core of each vehicle remains visually unchanged despite heavy damage. Boats and planes, however, will not show signs of damage until they are on the verge of exploding.

Grand Theft Auto Advance, which uses an independent top-down game engine, possesses a vehicle damage engine largely similar to that of GTA 1 and GTA 2, except large vehicles (i.e. buses and trucks) may also face the risk of rolling over when cornering at high speeds.

For Grand Theft Auto IV, vehicle damage has improved in leaps and bounds. Imminent destruction is now represented by either a burning engine, a burning gas tank or both, and clunking engine noises are reintroduced for vehicles with damaged engines. Alternately, the engines of severely damaged vehicles may simply cut off (this can be rectified by calling any number on the player's mobile phone); in addition, flipped vehicles no longer burn and explode. Also, most vehicles feature no gascaps as San Andreas had, eliminating the factor of exploding vehicles instantly with a single gun shot to the cap, however, very few cars feature such a cap, although it is merely for cosmetic purposes, such as on the Infernus or the Bullet GT. Sometimes, if players bail from any vehicles that is airborne at considerable great height, they may explode instantaneously on impact, with more chances if the vehicle lands around the engine or fuel tank area, although this also has the consequence of the player's death.

Instead of using readily modeled parts, GTA IV uses a more flexible, but not necessarily realistic, damage engine that allows any part of a vehicle's body to flex and distort based on the force and direction of an impact; the body of boats and helicopters may now be damaged in this manner, while motorcycles still do not. Essentially limitless on the extent on damage that can be done, players can literally flatten or crush any vehicle using extreme force; close contact with explosions may also damage a vehicle's bodywork severely. In addition, should a road vehicle sustain severe frontal or rear damage, its axle may also bend to a point when it can no longer function, locking and dragging its wheel along the ground as the vehicle moves, greatly affecting performance.

Small arms damage is handled differently in GTA IV, unlike in prior games where shooting a vehicle anywhere (engine, side panel, etc.) reduces its overall integrity. Side panels can sustain a significant amount of firearm damage whereas the engine compartment and fuel tank are more vulnerable. Drivers and passengers, including the player, risk health or armor damage if the greenhouse is shot.

Other minor damages were added in the game. Individual lights, including those of motorbikes, and windows can be broken. Opened doors can be broken off by forcing them against another solid object, as doors are now registered as solid objects. Loose hood and trunk lids can be torn off at high speeds, unless the player slows down and allow the lid to close. Scrapes, scratches and bullet holes are added for minute damages. Flat tires can break apart at a certain speed, resulting in the wheel running on a bare rim; tires may also be destroyed by fire or by burning out excessively, also fire damage may damage suspension, as the car will sag heavily onto whichever wheel. There is a glitch where if a door, trunk, or hood has been broken off and repaired "illegitimately" via the health cheat, they appear to be "weakened" as a simple rub against another car, or object, or driving over a broken fire hydrant will cause them to fall off. The only way to fix this, is taking a trip to a Pay 'n' Spray. Vehicles that have sunk or float in shallow water that leads to the engine cutting out, can be rescued by pushing the vehicle out of the water. They do, however, work on a rough timer of an estimated two minutes before the vehicle will no longer be operational.

In Grand Theft Auto: Chinatown Wars, the damage system reverts to that of the 3D Universe, limiting visual damage to ajar doors and hood and trunk lids, and smoke or fire from the engine. Vehicles are now certain to explode after sufficient damage, and the player will also be set alight when a vehicle they have damaged heavily ignites. Flipped vehicles will also explode in the same manner as it does prior to GTA IV.

Vehicle damage in Grand Theft Auto V is mostly similar to that in GTA IV; however, front quarter panels and bumpers can now fall off after sufficient damage, and wheels can break off the axle if hit hard enough. Vehicles that end up on the roof can be turned right side up by jarring the left analog stick, alleviating frustrations of potentially failing a mission due to a mission-specific vehicle being rendered unusable. However, this could already be done in GTA San Andreas, but on a somewhat limited scale. The fuel tank can be damaged to the point where it may leak fuel. The vehicle remains operational until the fuel runs out, and if the resulting fuel trail is ignited, it will catch fire and the vehicle will explode. Many non-emergency and non-industrial vehicles can be taken to Los Santos Customs and fitted with armor and puncture-resistant tires to increase durability.