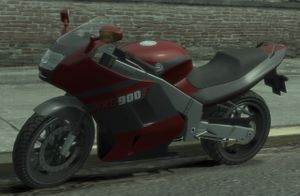 In Grand Theft Auto: San Andreas, the player can increase the Bike Skill of Carl Johnson, either through long rides on motorcycles or lessons in the Bike School. The higher the skill, the less chance Carl will fall off the motorcycle and the more responsive the motorcycle is.

In Grand Theft Auto IV and The Ballad of Gay Tony, after waiting for a moment after getting on a motorcycle, the player character and the passenger, if any, will put on a helmet. Some mission-specific characters will wear unique helmets not seen anywhere else in the game. In The Lost and Damned, the characters do not wear helmets, likely because of being more experienced riders as bikers.

Added in The Lost and Damned

Added in The Ballad of Gay Tony

One slight inaccuracy in the operation of motorcycles in GTA IV is that when the player answeres his cell phone while driving a bike, he uses his right hand. In reality, this would disable his ability to accelerate, as the throttle is located on that side; in the game, the player is somehow still able to operate and accelerate the bike while talking on the phone.

Retrieved from ‘https://www.grandtheftwiki.com/index.php?title=Motorcycles&oldid=411773’
Categories:
Cookies help us deliver our services. By using our services, you agree to our use of cookies.