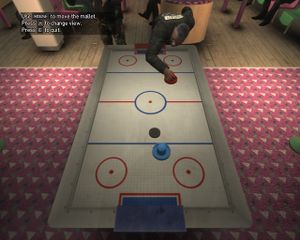 A round of air hockey in The Lost and Damned.

Air hockey is a tabletop minigame exclusive to The Lost and Damned and The Ballad of Gay Tony. Air hockey tables are only located in the two bowling lanes in Liberty City.

The basic premise of air hockey pits two players against each other in a challenge to push a hockey puck using mallets into the goal of each player on both ends of a table; this requires the player defend their goal while attempting propelling the puck into the opponent's goals. The first person to score seven points wins the game.

In both games, the player can opt to play air hockey against a random pedestrian, or against friends such as Clay Simons or Terry Thorpe in The Lost and Damned, or Armando Torres or Henrique Bardas in The Ballad of Gay Tony.

Retrieved from ‘https://www.grandtheftwiki.com/index.php?title=Air_Hockey&oldid=312839’
Categories:
Cookies help us deliver our services. By using our services, you agree to our use of cookies.