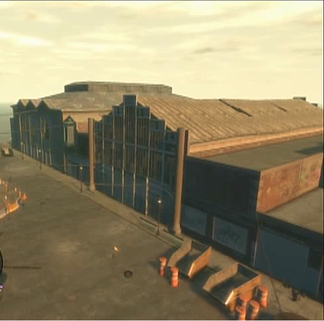 The Alderney Casino in Westdyke, Alderney.

The Alderney Casino is an abandoned casino located in Westdyke, Alderney, just off of Beaverhead Ave in Grand Theft Auto IV.

The player can enter the casino, though it is completely abandoned and has nothing of interest inside. There are, however, several bums sheltering inside. The interior is filled with rubble and construction materials. There are stairs that lead to a fire exit on the roof which can be accessed by going through an archway. The roof is crumbling and has numerous large gaps big enough for Niko Bellic or the multiplayer character to fall through - despite this a fall through will not result in death, only minor health loss. The Casino is one of the many racing locations in The Lost and Damned, the first episodic pack for GTA IV. The casino is based on the Asbury Park Casino located in Asbury Park, New Jersey, a casino that was actually abandoned and squatted by homeless, but is now going through a renovation process. It is the main starting location for party mode in multiplayer. In the multiplayer rendition, a Maverick and an Annihilator both spawn on the roof, and a second Maverick and an NRG 900 spawn in the disused parking lot. A Comet spawns at the end of Beaverhead Avenue, and beyond that is a jetty where a Jetmax spawns - But the Squalo spawns here in single player. In The Ballad Of Gay Tony, the Maverick was replaced by the Buzzard.

Retrieved from ‘https://www.grandtheftwiki.com/index.php?title=Alderney_Casino&oldid=402303’
Categories:
Cookies help us deliver our services. By using our services, you agree to our use of cookies.