Similarly armed with machine guns as the Annihilator, as well as additionally featuring missile pods, the Buzzard is evidently based on an AH-6 Little Bird, an attack variant of the MH-6 Little Bird light observation helicopter, which in turn is a military version of the OH-6 Cayuse and the MD 500C. It's important to note that the Buzzard has the old style tail stabilizer, characteristic of the MD-500C and its corresponding defender/AH/MH-6 counterparts. Being based off of a military class light attack helicopter, this makes the helicopter illegal at least in Liberty City.

The helicopter's compact build and lighter weight makes it very nimble and allows it to execute sharp banks and pitches with ease. However, its bubble canopy and lack of bulletproof glass offers little in the way of protection from heavy weapons like the Advance MG or Explosive Shotgun. The Buzzard can only hold two people as the rear compartment is entirely occupied by an ammunition hold for the miniguns.

According to in-game speech, the Buzzard that Luis Fernando Lopez intended to steal for Yusuf Amir was a prototype, meaning there is possibly only a single one in existence, unlike in real life where Little Birds are widely used by the US Military. The same stolen one is later gold-painted by Yusuf - this difference would be first recognized during the mission "Not So Fast" where Luis must use it to land on the roof of the Libertonian. LCPD will call it "a black/gold helicopter", which is dependent on which version Luis uses - the black version acquired by cheats or the golden version from Yusuf.

The Buzzard returns in GTA V, with a largely identical appearance to the GTA IV rendition. Nagasaki now mass-produce the helicopter. Also of note is the introduction of an unarmed version. 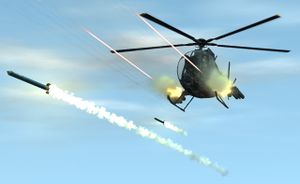 A Buzzard firing both the miniguns and missiles, TBOGT

Miniguns on the Buzzard are much more effective than those on the Annihilator - they have a much faster rate of fire, a narrower spread, and are fired both simultaneously, unlike the Annihilator which only fires one gun at a time. However, they do considerably less damage than the Annihilators guns. They never overheat, which allows for continuous fire.

The missiles from the Buzzard's two missile pods alternately fire one rocket at a time, being dropped a short height from the pods before launching forward. Because the missiles explode on impact with any solid surface after being unloaded, the player is advised not to use them at a low altitude with a sharp trajectory as the detonating missile can destroy the helicopter and kill the player.

Unless the player causes collateral damage, using the on board weapons does not invoke a wanted level.

In GTA V, the Buzzard can no longer can fire its miniguns and missiles simultaneously, and the player has to switch between the two. It also has a much slower rate of fire than it did in The Ballad Gay Tony. The changes were most likely made because the Buzzard's missiles can now lock-on and follow targets. Simultaneous rapid fire with lock-on abilities would make the Buzzard nearly impossible to defeat. When flying the Buzzard, a targeting reticule is present to assist the player in aiming.

Retrieved from ‘https://www.grandtheftwiki.com/index.php?title=Buzzard&oldid=398569’
Categories:
Cookies help us deliver our services. By using our services, you agree to our use of cookies.