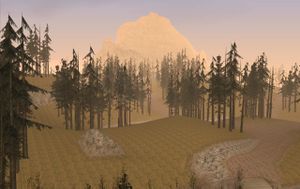 A view of the forested area of Whetstone, specifically the area of Shady Creeks. In the distance is Mount Chiliad.

Whetstone is an island region of San Andreas separated from the remaining landmass by a narrow channel. It is home to the small town of Angel Pine and the massive Mount Chiliad, the tallest feature in the entire state of San Andreas. It is somewhat based on Inyo County, home of Mount Whitney and the nearby town of Lone Pine.

After a deadly shoot-out with the rival Ballas gang under the Mulholland Intersection in Los Santos, Carl Johnson is arrested by C.R.A.S.H. officers Frank Tenpenny and Eddie Pulaski and dragged out to the remote town of Angel Pine in Whetstone. Here, Tenpenny and Pulaski use the recent incarceration of Carl's brother Sweet as leverage to force him to manage their out-of-town dealings, such as murdering witnesses to their extensive corruption. With little time to recuperate from the events in Los Santos, Carl finds himself in a strange new place, with no ammunition, and only a camera and orders to kill a man holed up in a cabin on nearby Mount Chiliad.

Carl quickly locates the cabin, which is heavily guarded by FBI agents, and lures the witness out. As the witness attempts to escape by car, Carl chases him down the mountain and kills him, making sure to photograph the "evidence" that he will no longer be talking. Carl then returns the evidence to Angel Pine for Tenpenny and Pulaski to pick up.

Later in the story, as Carl is performing tasks for Mike Toreno, a shady government agent with ties to the Loco Syndicate, he is asked to make a clandestine supply delivery flight to some of Toreno's men holed up in Angel Pine. Carl uses the Rustler supplied by Toreno at the abandoned airstrip outside Las Venturas to fly below radar detection all the way to Whetstone in order to make the delivery without Toreno being caught in the act by those watching him.

Grand Theft Auto: San Andreas
Retrieved from ‘https://www.grandtheftwiki.com/index.php?title=Whetstone&oldid=371787’
Categories:
Cookies help us deliver our services. By using our services, you agree to our use of cookies.