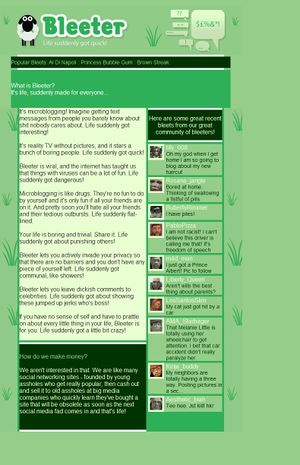 www.bleeter.biz is a website present in the HD Universe, first mentioned in The Ballad of Gay Tony. It is a parody of the social networking and microblogging site Twitter. The site allows users to post "Bleets" from their computer or phone, which generally contain small snippets of information about what they happen to be doing at the moment of their Bleet, much like Twitter's "Tweets". Bleeter's mascot is a sheep, and its slogan is "Life suddenly got quick." The site's name comes from the word "bleat," the sound a sheep makes, parodying the mindlessness and banality of Twitter and similar sites. Also, the sheep's sound effect is heard when a user checks a recently posted Bleet via smartphone. Like Twitter, it is often used by celebrities whose Bleets are subscribed to and read on a frequent basis by fans.

It is used by many people throughout The Ballad Of Gay Tony, such as British debutante Daisie Cash-Cooze who, during a random encounter, uses it to track down homosexual movie star Chris Hunt, who regularly Bleets. The Bleets help to pinpoint Hunt's location as he moves throughout Liberty City though they often need to be deciphered to find their true meaning. Evan Moss, Gay Tony's boyfriend is first assumed dead by Luis Lopez and Tony when he Bleets about being cornered by bikers in the mission Frosting on the Cake, which Tony reads. The pair both agree that it is an odd time for anyone to update their Bleeter.

Bleeter is one of several companies listed on the BAWSAQ.

The name could be a reference to the British comedian and TV presenter Stephen Fry, a more "famous" user of Twitter. During his Blackadder years, namely the last series, Fry regularly makes a strange bleating noise or "Baaah!".