Import/Export is a side-mission in Grand Theft Auto III, where the player is required to deliver specific vehicles to certain garages and cranes in Liberty City.

There are three Import/Export locations in total, all of which must be completed for 100% completion. 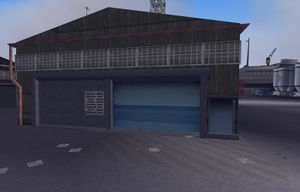 The Portland Docks requests vans, trucks, and various industrial/commercial vehicles to be collected through a garage. There is a list of vehicles on the front of the garage to keep track on what is collected. Because the list requests certain vehicles that will not be immediately made available until the player unlocks succeeding island, the list will typically have to be completed much later in the game.

Successful export of each vehicle to this garage rewards the player $1,000. Completing the list awards $200,000. 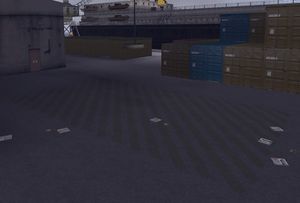 The emergency vehicle crane zone as well as the magnetic crane that will pick up the vehicles delivered.

The Portland Docks also wants emergency vehicles to be collected. The vehicles can be placed on the yellow stripes under a magnet connected to a crane just east of the Dock's Import/Export garage, near a parked Yankee. The crane will load the collected vehicle onto a cargo ship. Unlike both of the civilian vehicle garages, there is no list to keep track of what vehicles have been delivered. Because certain listed vehicles are only available after unlocking new islands, the list can only be completed later in the game. 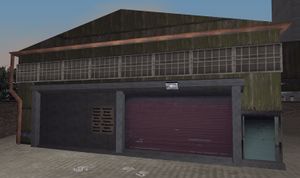 A garage in Pike Creek, Shoreside Vale, wants a different set of civilian vehicles (primarily private cars) to be collected. The vehicles can be placed in a garage north of the Shoreside Vale Pay 'n' Spray. There is a list of vehicles on the front of the garage to keep track on what has been collected.

Unlike the Portland lists, the Shoreside Vale list is significantly easier to complete due to the higher abundance of the listed vehicles. With the exception of the BF Injection, all vehicles in the list can easily be obtained within the district and island the garage is located in and the list can be diligently completed within 30 minutes of playtime.

Successful export of each vehicle to this garage rewards the player $1,000. Completing the list awards $200,000.

Retrieved from ‘https://www.grandtheftwiki.com/index.php?title=Import/Export&oldid=415313’
Categories:
Cookies help us deliver our services. By using our services, you agree to our use of cookies.