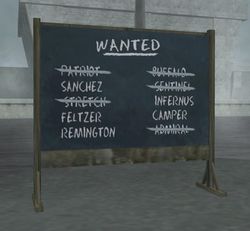 The board for the exports and imports feature in GTA San Andreas.

Exports and Imports are a series of side-missions in Grand Theft Auto: San Andreas which become available after "Customs Fast Track" for Cesar Vialpando. Similar to Grand Theft Auto III's Import/Export feature, Exports and Imports consists of a series of vehicle deliveries for money, as well as the ability to purchase any of the vehicle delivered.

To "export" or sell a vehicle, the player must obtain a "wanted" vehicle (as shown when the player is told via an on-screen message: "You can export this vehicle over at Easter Basin Docks.") and take it to specific marker on a cargo ship in Easter Basin, San Fierro, where it can be lifted in place via a magnetic dockside crane, or simply driven up a ramp linking the dock to the deck of the ship if the vehicle is compact enough to be driven onto the ship. Once the vehicle is in contact of the marker (and released from the crane magnet, if lifted using the crane), a message will show up that the player has successfully exported that vehicle. The player will then receive money depending on the type and condition of the vehicle.

To "import" or buy a vehicle, the player simply needs to walk up to the board in Easter Basin and select which vehicle they would like to import. The player can only import certain vehicles depending on the day of the week and vehicles are unlocked for importing once they have exported a certain vehicle in the list.

Exporting all 30 wanted vehicles is a requirement for 100% completion.

Each wanted list consists of ten different vehicles needed for export, ranging from motorbikes and regular sedans to off-roaders and sports cars.

Players have the option of either plucking a vehicle that spawns normally in traffic or parking space, or locate one specifically spawned in one spot when they are requested in the list. Note that vehicles will only spawn at certain locations if it is currently on a list; for example, the Euros will only spawn at The Camel's Toe if the player is on the third list of cars and has not exported a Euros already.

The max rewards are dependent on the Monetary Value of the vehicle set in the Handling.cfg file.

Completion of the first list awards the player an additional $50,000 on top of the reward granted delivering the last vehicle on the list.

Completion of the second list awards the player an additional $100,000 on top of the reward granted delivering the last vehicle on the list.

Completion of the final list awards the player an additional $200,000 on top of the reward granted delivering the last vehicle on the list.

Once unlocked, available vehicles for import originally consist of a base selection of a few cars uncovered from the shipping containers during "Customs Fast Track" (including the Club, Perennial, and Jester), with no vehicles available for Saturday. A specific model of vehicle wanted on the list will appear to purchase once it is delivered, but will only be available on a specific day of the week. Vehicles exported will be available for purchase at 80% of their export value (e.g. if a vehicle grants $999,000 when exported in 100% health, it can be purchased for $799,200).

Retrieved from ‘https://www.grandtheftwiki.com/index.php?title=Exports_and_Imports&oldid=415467’
Categories:
Cookies help us deliver our services. By using our services, you agree to our use of cookies.