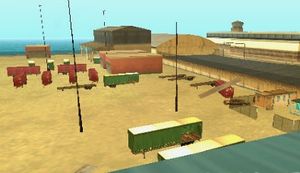 In 1986, the entire impound lot no longer exists and is converted into an empty lot and a bomb shop.