Exterior of the "new" Sunshine Autos in GTA Vice City.

In GTA Vice City, set in 1986, the business is based in a solitary modern two-storey showroom which more or less serves as a front for a vehicle theft ring for BJ Smith's "BJ's Used Autos" (where stolen vehicles are passed off as used cars for sale); during the player's purchase of the showroom, BJ points out Sunshine Autos was his first investment after he turned pro in his football career, but BJ had borrowed a lot of money from the city's loan sharks and wished to make some quick cash to get out of town with. He mentioned to Tommy that he could, "burn the place down if I wanted to", as the dealership was situated on prime development land.

The showroom becomes available for purchase for $50,000 after "Shakedown", when the player unlocks the ability to purchase various businesses in the city. Once purchased, the player will not only have access to the vehicle theft sidequest at A+B Auto, but will also be allowed to participate in a set of street races, as well as utilize the showroom's four garages that are capable of storing up eight road vehicles (Each garage is capable of holding two vehicles, but can only support up to specific models of mid-size trucks, including the Mule, Spand Express and Benson; the Yankee, Packer, Coach or Bus cannot be stored in the garages).

The showroom also comes equipped with the only Spray'n'go spray shop in town, which can be accessed at any point of time in the game. 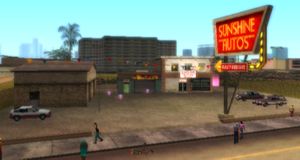 The dealership is primarily used by the player to purchase various vehicles, and hosts a series of Turismo races, which can be accessed from the side of the main building.

Once all the listed cars are delivered to A+B Auto's Sunshine Autos Import Garage in GTA Vice City, the Deluxo, Sabre Turbo, Sandking and Hotring Racer cars start spawning inside. Also before these cars start to spawn, a Sentinel can be found inside.

Retrieved from ‘https://www.grandtheftwiki.com/index.php?title=Sunshine_Autos&oldid=416736’
Categories:
Cookies help us deliver our services. By using our services, you agree to our use of cookies.