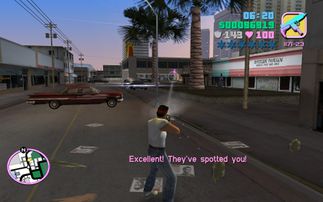 The Cuban-Haitian War was a gang war fought between the Los Cabrones/Cubans gang of Little Havana and the Haitians gang of Little Haiti in the events of Grand Theft Auto: Vice City. The major participants of the gang war were Tommy Vercetti, Auntie Poulet, Umberto Robina, Pepe, and Rico.

The Start of the War 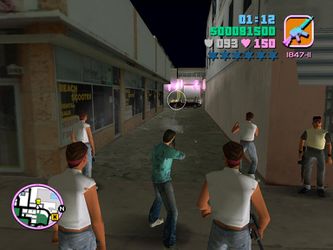 Tommy Vercetti and members of the Cubans gang attacking the Haitian Drugs Factory in the mission Cannon Fodder. 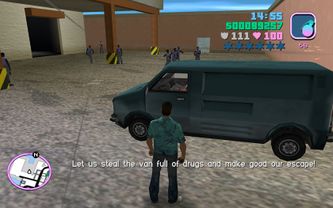 Tommy Vercetti and some Cubans engaging in a gunfight with the Haitians at the Haitian Drugs Factory in the mission Cannon Fodder.

By the time Tommy Vercetti got into Vice City, a Haitian Ganglord was murdered, according to Avery Carrington. The Haitians believed the Cubans were responsible for his murder, however, they had no proof to start the war in the first place. Avery Carrington needed to knock down property prices so he can develop land in Vice City and asked Tommy to dress up as a Los Cabrone member and crash the ganglord's funeral and kill the new Haitian ganglord in order to start the war between the 2 gangs, reducing property prices in the process. The Haitians quickly declared war on the Cubans and started attacking them. After the mission Tommy received a phone call by Umberto, who believed was talking to the recently killed Leo Teal at the beginning of the phone call but found out that Tommy had killed Leo and took his cell phone. Umberto was impressed and invited Tommy to a cafe that is owned by Umberto's father, Alberto Robina and asked him to work for him.

The Middle of the War

Umberto tested Tommy to prove hius worth, with Tommy successfully passing. Umberto quickly gave jobs to Tommy to weaken the Haitians. His first mission for Tommy was to steal a van filled with Drugs and take it back to the cafe. His next mission for Tommy was fo him and Rico to ambush a deal between the Haitians and the Sharks and take the merchandise back to cafe, but during the ambush Rico's boat blew up and Rico supposedly died. However, Tommy manages to bring the stuff back, avoiding heavy gunfire from the Haitians and the Sharks and the police after he gained a four start wanted level for crashing a drug deal.

Tommy was asked to meet someone in Little Haiti which turned out to be Haitians matriach Auntie Poulet. However, when he got to her shack, she used a herbal voodoo tea mixed with a mind-alterning drug which she used to brainwashed him and force him to do jobs against the Cubans without him remembering what he did. The first thing he did was to collect briefcases of Juju powder for Auntie Poulet. Her next job for Tommy was to use an RC plane and use it to blow up Cuban boats filled with drugs to turn the tables of the war. The final thing he did for Auntie Poulet was to snipe Cuban members while they were in a fist fight with Haitian gang members. After what he "did" for the Haitians damaged his relationship with the Cubans and not only that but he was not permitted back to Little Haiti. Attempting to re-enter Little Haiti, even if driving a Voodoo, would result in any nearby Haitians shooting at him on sight.

The End of the War

Angered for what they did, Tommy came back to the cafe to do one final job, to blow up the Haitian Drugs Factory. Tommy met up with Pepe and Rico, who supposedly survived the explosion, and attacked the the Drug Factory and successfully destroyed it making permanent enemies with the Haitians, forming an alliance with the Vercetti Gang and the Los Cabrones, and the Los Cabrones winning the war.

The Middle of the War

The End of the War