The Cubans, also known as Los Cabrones, are a Cuban street gang in Grand Theft Auto: Vice City and Grand Theft Auto: Vice City Stories. In both games they are led by Umberto Robina and are based in the Little Havana district of Vice City. Cubans are considered the prominent gang in the southern end of the mainland, considering that they defeated the Cholos and most likely the Haitians. 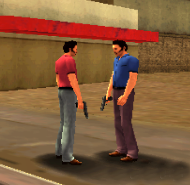 In 1984 the Cubans are known as the Los Cabrones and are in conflict with a Mexican street gang named the Cholos, over control of Little Havana and Little Haiti. Umberto Robina employs Victor Vance to aid him in his fight against the Cholos. Umberto Robina asked Victor to prove his worth to his gang by picking up a package from Downtown in a race with Hilberto, Carlos, Fernandez, Ronaldo and other Cuban gang members.

Victor Vance then begins to work with the Cubans, which includes killing various Cholos gang members who are causing havoc in Little Havana, and picking up Alberto Robina from the Hyman Memorial Stadium to avoid a possible abduction and/or murder. The Cubans eventually win the war with the Cholos after stealing their weapons supply and destroying the warehouse they had been stored in.

Tommy eventually returns to working for Cubans, and helps them destroy a Haitian drugs factory in Little Haiti. The final result of the war between Cubans and the Haitians is unknown, although the Cubans appear to have the upper hand. Umberto Robina and Cuban gang members also treat Tommy Vercetti as an equal, with Umberto once saying: "Tommy, to us, you Cuban". The Cubans most likely beat the Haitians in the gang war causing the Haitians to lose power.

Cuban gang members are either seen wearing white sleeveless shirts, red bandanas and jeans, or a fedora hat, light yellow shirts and black pants. They are armed with 9mm pistols.

The Cubans congregate and move in groups. They usually do not patrol the streets separately. The Cubans are not ordinarily hostile to Tommy, and will only attack in self-defense or if they are under the influence of the "Pedestrians Hate You" cheat; Cuban members will also attack the player if they hijack an occupied Cuban Hermes.

Cubans may attack or be attacked by the Vercetti Gang if they are seen entering or walking near the Cherry Popper Ice Cream Factory, Sunshine Autos or the Print Works. Likewise, Cubans will shoot and kill Haitians seen in Little Havana or near the Print Works. Also, PIGs will shoot and kill Cubans traveling near or into Starfish Island. Furthermore, the Haitians are frequently in conflict with the Cubans gang over turf and the Vercetti Gang over control of their assets; police act against both parties when gun battles occur. In addition, policemen will pursue and kill Haitians members in the same manner as they do with gang members and street criminals, allowing the player to attain "Good Citizen Bonuses" worth $50 each for each punch/kick/attack delivered to a fleeing Cuban member. Player must be careful though, as the Cuban (or any nearby Cubans) may attack player with a pistol. Also, accidentally hitting the cop will give the player a one star wanted level, killing the cop will give the player two.

The third version of GTA Vice City had all references to the Cuban and Haitian people removed, (along with a number of other trademarks), in response to Cuban and Haitian groups in the United States, who threatened to use action against Rockstar Games, on the basis that they were being discriminated against. This is why in GTA Vice City Stories the gang is referred to as Los Cabrones as opposed to simply "The Cubans," as they were in GTA Vice City. Los Cabrones literally means "The Bastards" in Spanish.

Gangs in the Grand Theft Auto series
Retrieved from ‘https://www.grandtheftwiki.com/index.php?title=Cubans&oldid=414559’
Categories:
Cookies help us deliver our services. By using our services, you agree to our use of cookies.