The Haitians are a street gang from Grand Theft Auto: Vice City. They are the main rivals of the Cubans/Los Cabrones, and they vie for control of the poorer neighbourhoods of Vice City (Little Haiti and Little Havana).

Auntie Poulet, the leader, gives Tommy Vercetti mind-altering drugs to make him use less-than-honest tactics in their war against the Cubans. Vercetti spurred by his friendship with the Cubans, massacres members of the Haitian gang and completely destroys their large drug manufacturing plant (killing many more members in the process), thereby severing all ties with Poulet and the gang. After this, the Haitians become openly hostile to Vercetti and later his gang members. The Haitians do not appear in Grand Theft Auto: Vice City Stories, meaning they became active in the city sometime between 1984 and 1986.

After the mission Trojan Voodoo, the Haitians will attack you whenever they spot you in their territory (Little Haiti). Some members will appear with pistols, but most are unarmed, using their fists when fighting.

The Haitians congregate and move groups. They usually do not patrol the streets separately. Until the mission Trojan Voodoo is completed, the Haitians are not ordinarily hostile to Tommy, and will only attack in self-defense; Haitian members will also attack the player if they hijack an occupied Voodoo. After the completion of Trojan Voodoo, the Haitians will become hostile to Tommy and will shoot him on sight, regardless of what he is wearing, what car he is driving and whether he is armed or not. Therefore, it is best to complete the Firefighter, Vigilante, Taxi Driver, Pizza Boy and Paramedic missions before completing Trojan Voodoo, or, if the mission has already been completed, it is best to complete the mentioned missions in Vice City Beach.

Haitians may attack or be attacked by the Vercetti Gang if they are seen entering or walking near the Kaufman Cabs depot or the Print Works. Likewise, Cubans will shoot and kill Haitians seen in Little Havana or near the Print Works (only before Trojan Voodoo). Also, Haitians will shoot and kill Bikers traveling through Little Haiti from Downtown, and will attack or be attacked by PIGs on the Links Bridge. The Haitians are frequently in conflict with the Cubans gang over turf and the Vercetti Gang over control of their assets; police act against both parties when gun battles occur. In addition, policemen will pursue and kill Haitians members in the same manner as they do with gang members and street criminals, allowing the player to attain "Good Citizen Bonuses" worth $50 each for each punch/kick/attack delivered to a fleeing Haitian member. Player must be careful though, as the Haitian (or any nearby Haitians) may attack player with a pistol. Also, accidentally hitting the cop will give the player a one star wanted level, killing the cop will give the player two.

The third version of GTA Vice City had all references to the Haitian people removed, (along with a number of other trademarks), in response to Cuban and Haitian groups in the United States, who threatened to use action against Rockstar Games, on the basis that they were being discriminated against. A Haitian organization in the US against racial opression was highly offended by the comments used in the game, such as when Vercetti is ordered to "shoot the Haitian dickheads". Because of this, the word 'Haitian' was taken out of the game's subtitles and they were simply referred to as 'Gangsters'. 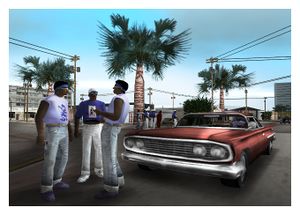 A pre-release screenshot of some Haitian gang members.
Gangs in the Grand Theft Auto series
Retrieved from ‘https://www.grandtheftwiki.com/index.php?title=Haitians&oldid=412195’
Category:
Cookies help us deliver our services. By using our services, you agree to our use of cookies.