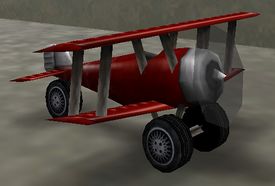 The RC Baron is designed as a model bi-plane with a red body; this design trait, coupled with its name, suggests the plane's design is inspired by the Red Baron, an ace pilot in First World War. In its first appearance in GTA Vice City, the RC Baron originally featured landing gear wheels derived from sports cars in the game; for GTA San Andreas, the landing gear was modified to appear more to scale of the plane. The GTA San Andreas rendition also comes with a functional machine gun.

The RC Baron has been adopted for use in several missions in both GTA Vice City and GTA San Andreas.

The RC Baron is otherwise unattainable outside the missions unless trainers or modifications are used.

Retrieved from ‘https://www.grandtheftwiki.com/index.php?title=RC_Baron&oldid=362157’
Categories:
Cookies help us deliver our services. By using our services, you agree to our use of cookies.