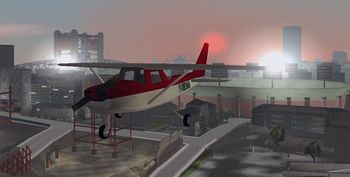 The non-controllable Dodo in GTA III.

The full-winged Dodo is an unobtainable version of the regular Dodo. It has a slightly darker skin texture in contrast to its controllable counterpart, along with flashing white and red strobe lights. In GTA Vice City the Dodo can be seen flying with a banner attached to the tail. The banner differs between the PS2 version, and the Xbox and PC versions. The PS2 version uses a generic newspaper with the SWAT team headline. The PC and Xbox versions use the Zombie Elvis Found! newspaper. The propeller is static and does not spin. The "Y-ME369" registration number is rendered incorrectly, causing it to be semi-transparent. The plane is not solid, so the player will travel through the plane if the player manages to reach it. The plane can be shot down with rockets only, but will result in an instant three-star wanted level, and will escalate into a four-star wanted level upon explosion. Spawning through simple third-party trainers without further modifications, such as a garage editor, will crash the game upon spawning.

The vehicle was used in two missions in GTA III:

Retrieved from ‘https://www.grandtheftwiki.com/index.php?title=DeadDodo&oldid=398770’
Categories:
Cookies help us deliver our services. By using our services, you agree to our use of cookies.