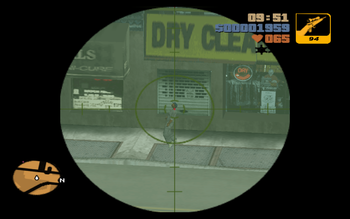 First-person view as seen throught the crosshairs of a Sniper Rifle.

With the advent of improved 3D graphics and detailing, first-person view was introduced in Grand Theft Auto III in two forms, the ability to look around in first person view, as well as the ability to aim a weapon.

First-person aiming with a gun is crucial, particularly for sniper rifles, allowing the player to accurately aim and shoot at targets from afar, while avoiding the use of an auto-aim. Similarly, certain assault rifles (i.e. the M16/M4 and Ruger) and rocket launchers allow the player to aim in first person view as they hold the aiming button or key. Similarly, the camera introduced in GTA Vice City allows the player to take pictures from a first-person viewpoint. First-person view for assault rifles was eliminated in favor of a over-the-shoulder aiming system in GTA San Andreas, but the feature was retained for other weapons.

Standard first person view was also available in GTA III and GTA Vice City when the player is on foot. By moving the right analog stick in console versions or pressing appropriate directional keys in the PC version (only if the control scheme is set to "classic"), players can look around from the player character's position. Like first person aiming for assault rifles, this feature was removed in favor of a camera that rotates around the player. For GTA IV, however, the player's camera phone can be used to look around in a first-person view.

The hood view is the closest viewpoint to a first-person view inside a vehicle since GTA III (again, with the exception of GTA Advance and GTA Chinatown Wars).