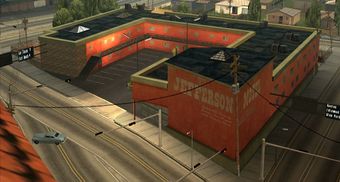 The Jefferson Motel is a motel located in Jefferson, Los Santos; and is the main setting of Reuniting the Families. The motel has a number of rooms and a Sprunk vending machine, allowing the player to replenish Carl Johnson's health (at any point of the game). The motel is the meeting place for the Grove Street Families, Seville Boulevard Families and Temple Drive Families in Reuniting the Families. The meeting, aimed at re-uniting the families, is ambushed by the police. The southern wall of the motel also has a gang tag that can be sprayed, there is also an MP5 on the roof of the hotel. Jefferson, the district the motel is in, is controlled by the Ballas in 1992 , although not many Ballas patrol the Jefferson Motel, which makes it harder to take over.

Retrieved from ‘https://www.grandtheftwiki.com/index.php?title=Jefferson_Motel&oldid=376478’
Categories:
Cookies help us deliver our services. By using our services, you agree to our use of cookies.