The April 2001 issue of the online version of the fictional Liberty Tree newspaper (Vol. 1, Issue 3) was released on April 1, 2001. It is the third in a series of Liberty Tree issues to be released to promote Grand Theft Auto III.

The issue is given a blue color scheme with "All The News, None of the Blues" as its present motto. 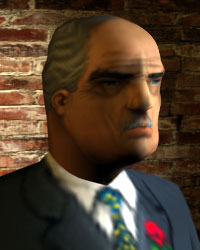 Salvatore Leone walked free from a federal court yesterday, as the case against him collapsed. Leone, who had been on trial for tax evasion, a case that the state prosecutor intended to turn into a racketeering charge, smiled as he walked free from the courts in downtown Liberty City. Leone had been on trial after Inland Revenue experts found serious accounting irregularities in the Leone books, including $450,000 of undeclared income.

The state had been very confident of making the charges stick, the prosecution's case being based on the large sum of undeclared income. The jury, however, unequivocally accepted Mr. Leone's explanation that this money had not been accrued by racketeering, but by the illegal importing of tomato sauce, from Mr. Leone's hometown of Palermo, Sicily. Although Mr. Leone was subsequently found guilty of a minor charge of importing fresh foodstuffs without a license and paid a cursory fine, as well as all unpaid revenue, he has stayed out of prison again.

This is the fifth time the state has taken Leone to court since, they allege, he took control of the Leone crime family in a bloody power struggle in the mid 1980s. It is also the fifth time he has walked free. He has paid numerous fines, but no matter how serious the evidence, he has always avoided conviction.

Upon leaving court, Leone said to waiting reporters "I am just a businessman from Sicily. I have made a few mistakes, and perhaps I have not always followed the law to the letter, but I always believed in its spirit. The police associate me with my brother, but I never do these things they blame me for."

Leone's lawyer, Maurice Goldberg commented, "Mr. Leone is a dyslexic. Court tests prove it. His accounts are always in a mess, but he is not dishonest. Nor is he in the mafia. As a Sicilian, he knows some unsavory characters, but what kind of America is it when a man is guilty because of the friends he has? I don't want to live in an America like that, do you?"

No, Mr. Goldberg, we certainly don't.

A crime suspect about to be introduced to Liberty City's latest crime fighters.

Liberty City's beleaguered police department has finally gotten some help. After years of under-funding and low morale, a new fleet of helicopters has been purchased to help patrol the city streets. The choppers, each manned by a team of sharp shooters, will be used to counter the recent spate of car jacking and street crime that has hit our city.

Mayor O' Donovan noted, "The new fleet of helicopters is going to give prospective criminals the shock of their lives. Now, people are going to be watched from above as well as below. I'd like to see someone try to steal a car from someone or out run the police while under a hail of bullets from a helicopter. It's going to be apocalypse right now for all criminals out there." When asked if the millions of dollars could have been better spent on helping rehabilitate criminals or on tightening up gun control in the city, the Mayor responded, "Gun control is a typical Liberal cure-all. It doesn't work in America. Once a criminal, always a criminal, and a criminal only understands one thing." When asked about his own, well documented criminal past, O' Donovan responded, "A man can change. What's past is past. We've already dealt with this a hundred times."

Zaibatsu Pharmaceuticals, the pharmaceutical arm of Liberty City's very own Zaibatsu Corporation, unveiled their new wonder drug, Equanox, yesterday at the city's annual Beneficial Chemicals Trade Show. Equanox, hailed as a wonder drug by its inventors is a new attempt to conquer that very modern malaise, dissatisfaction. Zaibatsu are claiming that Equanox will combat lethargy, depression, melancholy, sexual dysfunction and just about anything, caused controversy when the FDA repeatedly refused a license for its release. Then, thankfully, the FDA relented, allowing the Zaibatsu Corporation a priceless toe-hold in the $1 billion mood enhancer and anti-depressant market. Money that Zaibatsu promise will be funneled right back into helping Liberty City. The drug, which the FDA initially claimed caused "psychotic behavior in rats, and is synthetically like PCP, only more toxic" will go on sale in the coming months. We all hope it is going to help bring a few more smiles to Liberty City residents and dissatisfied folk everywhere.

Insurance premiums are set to rise above the rate of inflation for the seventh year running. Figures showing a rise in car crime by 18% have prompted insurers to raise premiums across the board for residents of Liberty.

"There are ways you can make savings on your car or home insurance," an industry representative told the Tree, "for example, fitting a car alarm, living on a well-lit street -any precautions taken by an owner wishing to insure their property will be taken into consideration. If people think someone is trying to rob them, they should move away quickly, screaming when absolutely necessary."

Pollution "not bad for health"

A government body said the recent oil spill in Liberty City harbor "would cause no lasting damage to Liberty City inhabitants, as long as they don't swim, or drink tap water." The oil spill, which environmental agencies claim is a direct result of the deregulation of the Liberty City Harbor Authority and the closing of the pilot's office, has led to a black film enveloping the harbor and occasional flash fires on the surface. The government official noted "these flash fires are harmless unless you get burnt, and are very reminiscent of the Irish phenomenon of Will-o-the-Wisp. It is a great treat for all Liberty's inhabitants to see such an ancient tradition being played out in our harbor. The oil spill will pose no immediate threat to humans unless they like swimming in oil, while any animal stupid enough to live in that harbor got what it deserved. This spill is nowhere near as serious as the pollution leak of 1988, so I don't know why people are complaining."

Retrieved from ‘https://www.grandtheftwiki.com/index.php?title=Liberty_Tree_Articles_in_GTA_III/April_2001&oldid=338137’
Category:
Cookies help us deliver our services. By using our services, you agree to our use of cookies.