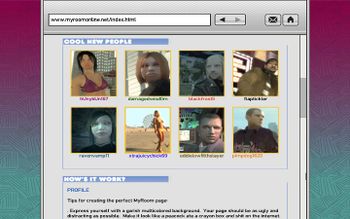 www.myroomonline.net is a website accessible in Grand Theft Auto IV. It is a parody of social networking site MySpace.

MyRoom's main page directs to several people's profiles, much like "Cool New People" on MySpace, and each profile is a satire of a stereotypical MySpace user. Some profiles include:

In a report on Weazel News, millions of sex offenders have accounts. An old woman states that the site should be shut down; her profile has a picture of herself taking a sponge bath and "no one wants to be her friend". A younger girl states that she has 10,000 friends "who are actually strangers who stalk her".

In an email from Marnie Allen to Niko Bellic, she mistakenly names the site myroom.com, which doesn't exist in the game.

Aside from each person's profiles, there are other stereotypes drawn from MySpace (and Facebook) such as cyberstalking, people's need for other people to comment on their pictures (and cries for attention in general), and dating website spam disguised as women's comments.

Retrieved from ‘https://www.grandtheftwiki.com/index.php?title=Myroomonline.net&oldid=373049’
Categories:
Cookies help us deliver our services. By using our services, you agree to our use of cookies.