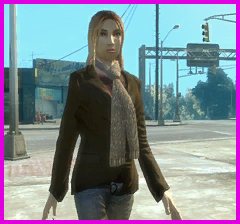 Samantha Muldoon is a celebrity in Grand Theft Auto IV. At the very beginning of the game, she is married (her fourth marriage, none lasting more than a month) to Kirk Simplex for a mere twenty minutes. Their marriage ceremony cost $50 million, featured her thirteen foreign children in heritage costumes, and A-Z List magazine paying $15 million for exclusive coverage. However, Our Own Reality quotes her as saying "We'd barely pulled out of the parking lot when he started messing around with my CD changer and picking his teeth with a cocktail stick. We got into a huge fight and I just handbrake-turned the car and drove straight back for an annulment. We might have been drunk but I knew right there and then he wasn't the right man for me".

After her failed marriage, Muldoon switched religions three times in one week (from Buddhism to Kabbalah to Epsilon). She has fourteen adopted children from various countries, the most recent is a baby from Sub-Saharan Africa which she returned due to its constant crying; Another child, "Wave", who had grown to be eight years old and was given a faux-hawk, wasn't seen for some time and was probably sent home as well.

Muldoon is meant to parody Angelina Jolie, as well as both Muldoon's religious experiences and children are drawn from Madonna. Her extravegant wedding is based on Lakshmi Mittal's daughter's wedding, and a strikingly similar supermodel-banker match, Aleksandra and Andrey Melnichenko. Paying millions of dollars to photograph weddings is a common practice by OK! Magazine.