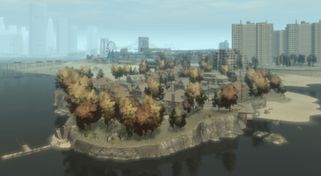 Beachgate in GTA IV. The geography and character of Beachgate contrasts with its neighboring districts, most notably Hove Beach and Firefly Projects, both of which are visible in the background.

Beachgate is a peninsula in southeastern Broker, Liberty City, and is a high class homing addition in Liberty City. It is bordered by Crockett Avenue to the north, (Firefly Projects), Shinnecock Avenue to the west (Firefly Island), and an unnamed body of water to the south and east. It is based on the New York neighborhood of Seagate.

Beachgate is an affluent, gated community, housing a low-rise apartment and a number of large single-family houses usually with luxurious cars in their driveways. The neighborhood is separated from the rest of Broker, giving it its own unique feel that is unmatched by any other areas in the borough. At the end of the main street, there is a broken road barrier. If the player looks down in the ocean, they will see two car wrecks.

The Faustin family, Mikhail, Ilyena and Anna, resided in a mansion at the very southern end of the community's main street, Shinnecock Avenue, until Mikhail's death, when Ilyena and Anna fled to a boardwalk in Hove Beach. An unlocked Turismo can be found parked in the driveway (in Grand Theft Auto: Chinatown Wars, an Infernus appears instead).

A guard house is stationed at the entrance to the community, but there is no restriction on access.

Retrieved from ‘https://www.grandtheftwiki.com/index.php?title=Beachgate&oldid=379548’
Category:
Cookies help us deliver our services. By using our services, you agree to our use of cookies.