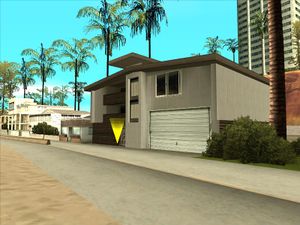 The Santa Maria Beach Safehouse is a safehouse located in Santa Maria Beach, Los Santos in Grand Theft Auto: San Andreas. Carl Johnson, the player character, can purchase the safehouse for $30,000. The safehouse has a garage that can store three vehicles. The interior of the house is average size, it has a hallway with the first bedroom on the left and the kitchen on the right, further down the hall is the wardrobe in which players can change there outfits, going futher staright is the second bedroom, and the living room in to the right of the hallway.

The safehouse serves its best purpose when used as a saving-point for two major tasks - dates with Helena Wankstein and Trucking missions. Other than these, it may also serve an additional purpose during the drug trade courier missions if used to start an attack on the cash trucks.

Retrieved from ‘https://www.grandtheftwiki.com/index.php?title=Santa_Maria_Beach_Safehouse&oldid=418388’
Categories:
Cookies help us deliver our services. By using our services, you agree to our use of cookies.