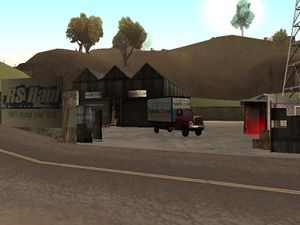 The Trucking side-mission is located at the RS Haul depot in Flint County, just west of Los Santos. The missions are activated by standing inside the red mission marker. The business generates $2,000 per day after completing all eight trucking missions. They become available after completing Catalina's mission, Tanker Commander, which features one of the depot's employees, Mr. Whittaker.

The missions consist of either delivering cargo within a time limit, delivering an illegal cargo whilst being pursued by the police, or delivering a fragile cargo without damaging it. The successive missions are increasingly difficult, with tighter time limits, stronger police attention or more easily damaged cargo. Leaving the cab or detaching the trailer for too long will result in mission failure.

Illegal goods must be delivered. The player starts with $2,000. The player will receive a minimum wanted level of three stars once the player leaves the compound. The wanted level can not be decreased. Locations include:

Missions 4 and 5 need the player to be able to access San Fierro.

Similar to mission 1, goods must be delivered quickly. The player starts with a maximum of $3,000. Destinations include:

Similar to mission 1 but the goods are extremely fragile. (The truck is damaged and cannot be repaired, not even with cheats) The player starts with a maximum of $4,000. Destinations include:

Missions 6 to 8 need the player to be able to access Las Venturas.

Similar to mission 3, illegal goods must be delivered. The player starts with a maximum of $5,000. Destinations include:

Goods must be delivered quickly without damage, a combination of missions 1 and 2. The player starts with a maximum of $7,000. Destinations include:

Similar to mission 3 but with highly illegal goods. The player will receive a minimum wanted level of four stars once the player leaves the compound. The player starts with $10,000.

After completing the Trucking side mission, the player can return to start the Trucking mission with all future missions randomly ordered.

Retrieved from ‘https://www.grandtheftwiki.com/index.php?title=Trucking&oldid=378444’
Categories:
Cookies help us deliver our services. By using our services, you agree to our use of cookies.