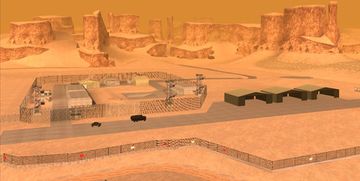 Area 69 is the highly protected and secretive government research facility in the heart of Bone County, San Andreas depicted in Grand Theft Auto: San Andreas. It sits immediately to the south of Verdant Meadows, to the west of Las Venturas, to the east of El Castillo del Diablo, and directly to the north of Green Palms. 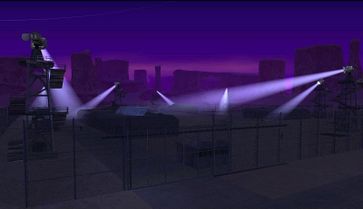 Area 69 as it appears at night.

The base is a spoof of the real-life Area 51 in southern Nevada, but named after the 69 sexual position. The in-game base differs greatly from the real life Area 51, evidenced by the lack of a runway, smaller overall size, and different layout. In the past, Area 69 was associated with the long-held rumor of aliens and UFO sightings in the game. Entering or flying over the base will result in a 5-star wanted level. Flying over the base results not only in the wanted level, but also trackings and attacks from SAM sites and pursuing Hydras. Flying too close to the edge of the base will also result in attack from the nearest SAM site, although a wanted level will not be obtained if close enough to the base's periphery. The base's four SAM sites may be destroyed using powerful weaponry such as missiles from a jet, a rocket launcher, or a minigun. Furthermore, their heat-seeking missiles may be avoided using countermeasures (flares), if using a Hydra. The SAM sites may even shoot down non-Hydra NPC airplanes and cause them to crash to the ground.

The base houses various clandestine government projects, including the Black Project Jetpack, a couple of weapon pickups and a couple of body armor and health icon spawn points. Echoing the conspiracy theories surrounding Area 51, it is implied that the facility may be tied to local housing projects involving UFOs and extraterrestrial life, as suggested by the presence of the nearby Lil' Probe'Inn, the dialog on the base's PA system during the "Black Project" mission (Quotes: "Would the personnel working with the alien body, please put it away." and "Personnel found stealing alien technology will not be invited to the next employee outing."), and by dialog on Marvin Trill's in-game radio show Area 53. Much of the base consists of underground research labs, although the player can only enter these labs during the course of a single mission (or by finding a way into San Andreas' "Blue Hell" — an area under the main terrain mesh — and finding the underground base there). The above-ground structures include a series of watch towers, a control tower, a small airstrip, and garages for military vehicles. These garages are the first areas in the game in which military vehicles will automatically spawn. 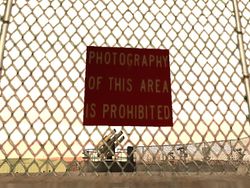 An "unauthorized" photo of Area 69.

Public relations for Area 69 have suffered from a great deal of distrust and suspicion from the people of Bone County. There have been reported over 30 deaths due to people attempting to trespass onto the base. In fact, front-page headlines of an issue of The San Andreas Times read, Over 30 people killed in Area 69, Demolish Area 69!!, and also Area 69 = Rubbish.

In one segment of WCTR News, played after completion of Yay Ka-Boom-Boom, Lianne Forget reports about government officials having "denied the existence of an area in Bone County that isn't on the map" before going on to state that a person, unprepared to be named, said, "The so-called place that isn't called anything doesn't exist. And if it did, we'd name it something." Later, in the opening cutscene of the mission Black Project, it is implied that this is a reference to Area 69, as The Truth calls it, saying "There's a place, not even on the map...".

After making his way out to Bone County to meet up with undercover government agent Michael "Mike" Toreno at the abandoned airstrip, protagonist Carl "CJ" Johnson begins performing dangerous and difficult tasks for this shady government agent, whose "paymasters" remain unidentified (although it is speculated that Toreno may be working for the NSA or the CIA). After temporarily satisfying Toreno's wishes, Carl receives an unexpected visit at the airstrip from The Truth, who Carl hasn't seen since leaving San Fierro. The Truth, disturbed by Carl's allegiance to Toreno, makes his own request: to steal the Black Project from the nearby Area 69 military research facility. The Truth drops Carl off in front of the facility's main gate, and drives off in a hurry, leaving Carl to infiltrate the base alone. Armed with thermal vision goggles, Carl sneaks into the base, and down into the underground research labs. Carl is forced to shoot his way through soldiers and scientists alike, as he makes his way into the depths of the compound, where he finally locates the jetpack. Climbing into the jetpack's straps, Carl boldly applies thrust and escapes through the open sky bay overhead, and blasts off away from the facility as quickly as possible to avoid being shot down by SAM sites and military personnel. As he escapes, a voice over the loudspeaker can be heard frantically shouting, "Get General Mills on the line!", a tongue-in-cheek reference to an eponymous American cereal manufacturer.

Several missions later, when Carl is contacted by corrupt C.R.A.S.H. officer Frank Tenpenny to the officer's house in Prickle Pine, Las Venturas, he is asked to steal, from a DEA officer, a dossier which has a compilation of the crooked cop's activities and scandals. Carl locates the agent, as per Tenpenny, to Aldea Malvada, where, just in case the agent identifies him and flies away in his helicopter, Carl chases him down, but in the process, has to find his way through Area 69, since the agent flies right through, but Carl cannot, else he will be prone to attacks by NPC-controlled Hydras upon attaining a five star wanted level.

Retrieved from ‘https://www.grandtheftwiki.com/index.php?title=Area_69&oldid=418368’
Categories:
Cookies help us deliver our services. By using our services, you agree to our use of cookies.